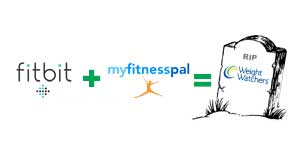 What is Weight Watchers hoping that overweight people world-wide don’t figure out? It’s this: The cold hard truth is for around $140 and a free “app” download, you can have the most up-to-date and powerful weight loss tools at your fingertips for as long as you like. The combination of the Fitbit activity tracker and Myfitnesspal’s free online calorie counter and diet plan is changing the way people around the world are choosing to lose weight. This change is having a very serious impact on the major players in the industry, most of all Weight Watchers. How can this be?

Weight Watchers offers a great program. It has been around since the nineteen sixties and it has helped millions of people all around the world lose countless unwanted pounds. They achieved this major feat through group and personal coaching that was designed to change members eating habits and patterns. The system breaks these patterns down and rebuilds them by replacing old bad eating habits with new good ones. This was a very effective approach for a very long time. But like anything, what doesn’t change and progress, fails. And that is exactly what is happening to Weight Watchers right now.

The Weight Watchers system is based on extensive scientific research into how and why we put on weight as well as the physiological hurdles to losing weight. This research is on-going and very expensive. This research is core to the program. Unfortunately, Weight Watchers has no choice but to pass these expenses on to its members in the form of sizable monthly membership fees levied upon all active members. Recently, Weight Watchers has experimented with value add-ons like personal coaching, wearable fitness trackers, apps and program starter kits. They have even started offering deep-discounts to attract new and old members. At one point, they were discounting the online program by as much as 70 percent! Why would a globally top-rated weight loss company need to do this? It smacks of desperation, doesn’t it?


It turns out that Weight Watchers is a desperate company. After attendance, membership and sales numbers peaked at an all-time high in 2011/12; these same numbers have been in steady decline up to and including this year. Surely, this decline is not due to a shrinking market! (Pun intended) You only have to look at how the weight loss industry has developed in the same time period to see what happened.

As Weight Watchers sales and membership has reduced dramatically, there has been a quiet revolution taking shape to fill the void. What started out as novelty fitness apps, have become the new mainstay of personal fitness around the world. Apps like Myfitnesspal, Sparkpeople and Lose It! have quietly built followings, partly because they are free (or very inexpensive) and very accessible but also because they are designed to be engaging and entertaining. Slowly over the past few years, people have discovered how fun and effective these apps are especially when paired with a personal fitness tracker like Fitbit or Jawbone. These new partnerships have steadily eroded Weight Watcher’s existing and potential market base.

Weight Watchers is a dinosaur. In a world where $140 bucks will buy you a wearable fitness computer and as many fitness and diet apps as your mobile device will hold, you just can’t stay in business offering the same service that the competition is giving away for $20 per month, plus all the additional fees. That’s just crazy. How long do you expect your clients to pay you to do weight loss research?

How can Weight Watchers survive in the Internet age? If they are smart, they will try to regain some of their lost market share by taking a page from the playbook of their competition. That is, provide a basic free offering to attract new customers and offer those value-ads once they are hooked on the free product.